Over the past decade, trillions of dollars have flown out of actively managed equity funds and into passive investment vehicles, most popularly in the form of mutual funds and ETF’s that track specific indexes or sectors (SPY),(IVV), (VTI), (VOO). 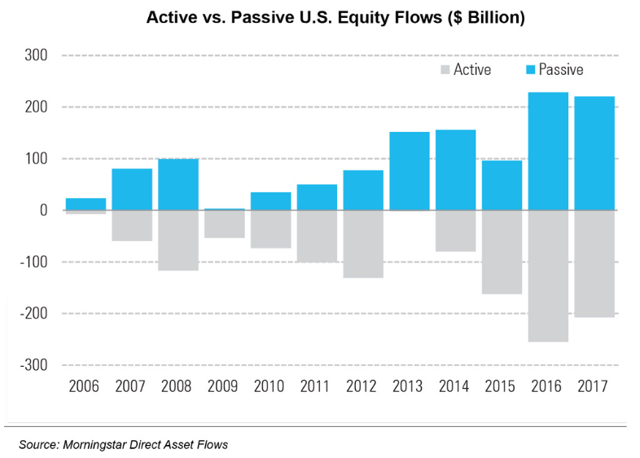 We’ve seen similar shifts in the fixed income markets, though the main focus of this article will be on equities. 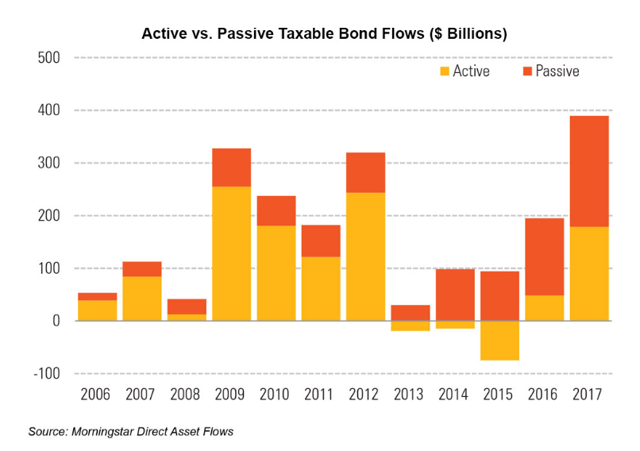 Though the original rationale for passive indexing makes a lot of sense, and while it still may be the best strategy for many market participants, the prospective returns for passive indexing strategies over the next 5-10 years look dismal (especially when considering changes in index structures and current diversification levels), and investments at today’s valuations lack a true margin of safety.

The Shift Towards Passive Investing

A few arguments are commonly used in favor of passive index-based strategies.

Fees: Most active fund managers have charged excessive fees, eating away at the returns of investors: This is one positive outcome that the shift towards passive investing and the under-performance of active managers has led to. Notably, because of the rise of the index as a performance benchmark, many active managers are focused on relative performance and charge high fees for portfolios that are essentially closet-indexes (largely for reasons of career risk, given that a few years of under-performance can be detrimental, even to managers of former all-star status like David Einhorn or Bill Ackman). Chasing relative performance detracts from the value active managers can add, and this shift has actually led to a shaking out of managers who may not have been adding much value in the first place. Fortunately, for investors across the board, the shift towards passive investing has put pressure on fees throughout the whole industry 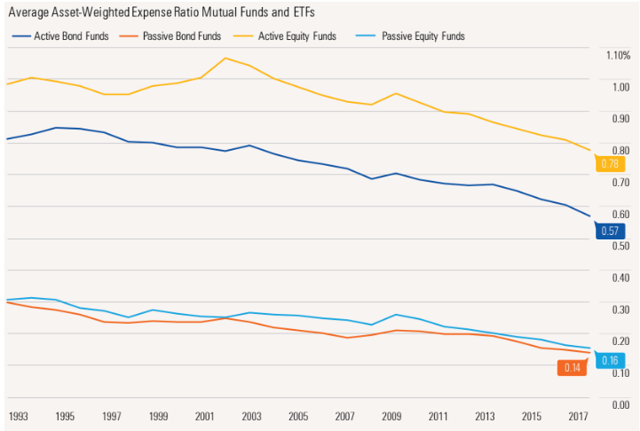 Historical Returns: The S&P 500 index has returned an annualized return of around 10% since its inception in 1928 (though as I’ll get into, this number is misleading). Subsequently, most active mutual-fund managers have not historically not outperformed a low-cost index strategy. 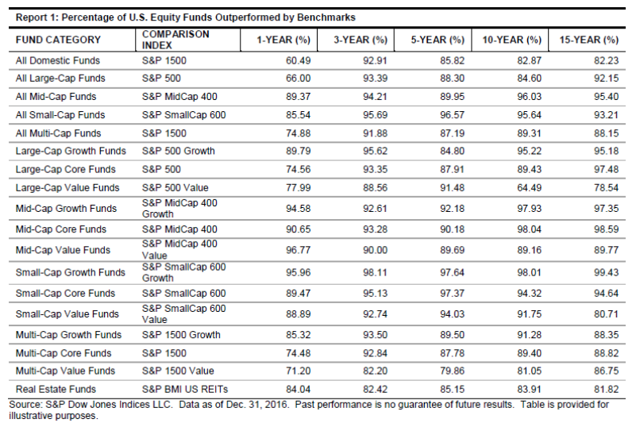 In his address to the American Finance Association in 2008, Kenneth French presented data showing that the average investor would have realized annual returns that were “67 basis points higher in a passive portfolio” than in an active portfolio from 1980 through 2006.”

While it’s true that most active managers have under-performed their benchmarks after fees, these historical return metrics are not an accurate representation of what active and passive investors can expect going forward (especially in the next 5-10 years, but also over a longer time horizon), and investors would be wise to be more forward thinking.

I’m not going to do a deep dive on market efficiency, but here are few great resources to dig into:

The Superinvestors of Graham-and-Doddsville – Warren Buffet: In this famous piece, Buffett argues against the claim of the Efficient Market Hypothesis that any excess returns delivered over the long term were merely the product of chance, in favor of value investing. He uses an example of coin-flipping orangutans, and uses an analogy that if you found out the majority of the winning orangutans came from the same zoo in Omaha (referring to value investing), it most likely means something.

Adaptive Markets: Financial Evolution at the Speed of Thought – Andrew Lo: This is an interesting book that gives a solid overview of both the Efficient Market Hypothesis and the foundations of behavioral finance, before drawing from both camps as well as from various biological sciences, to come up with a better theory of how financial markets function. Lo argues that modern finance theory (drawing from physics) doesn’t paint an accurate depiction of financial markets because in essence, they are a social construct.

Looking for Easy Games, How Passive Investing Shapes Active Management – Michael Mauboussin: This is a fantastic paper about how passive and active investing influence one another, the pros/cons of both, and on how passive investing leads to more inefficient markets (which are required for active managers to generate alpha).

Though passive indexing may prove a wise choice for investors with little to no market knowledge, there are a few problems with it that will likely lead many investors to be disappointed over the next 5-10 years.

The large shift towards passive investing has changed markets, and we’re now at a point where many of the original rationales for the strategy no longer make sense. The flow of trillions of dollars into passive funds (along with central bank actions) has pushed financial asset prices through the roof, via massive buying irrespective of price and fundamentals. In addition to sky high valuations, historical return and diversification metrics are misleading. Passive index investor’s expecting returns similar to the S&P 500’s quoted 10% annualized historical returns are in for a big let down.

Simply put, this trade is crowded, right down to the definition (as defined in the Mauboussin paper referenced above) :

Crowding, a condition where investors do the same thing at the same time without full consideration of the implications for future asset returns

Though valuations could certainly get higher, the stock market today is far from cheap and the prospective returns are low. The worlds largest asset managers (who sell most of these passive products) agree.

BlackRock, Vanguard’s Jack Bogle, Morningstar – do not expect more than about 2% to 4% returns from stocks over the next five to 10 years.

Stock market to GDP: This is a measure of the price of the stock market (market capitalization) relative to the U.S. GDP. (Also known as the Buffett Indicator or Yardstick): 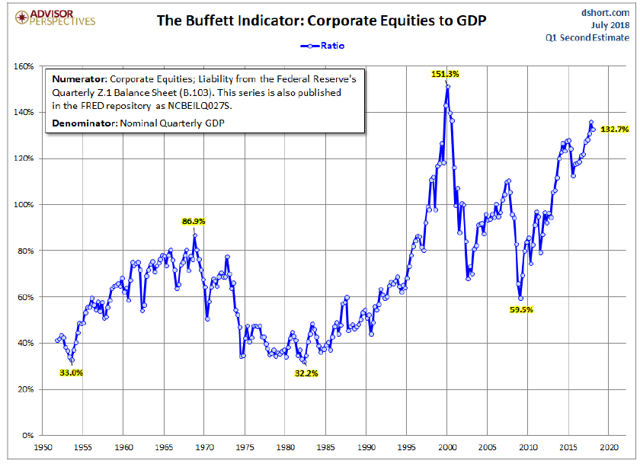 Here’s a variant of the same measure, with the Wilshire 5000 as a proxy for the entire stock market: 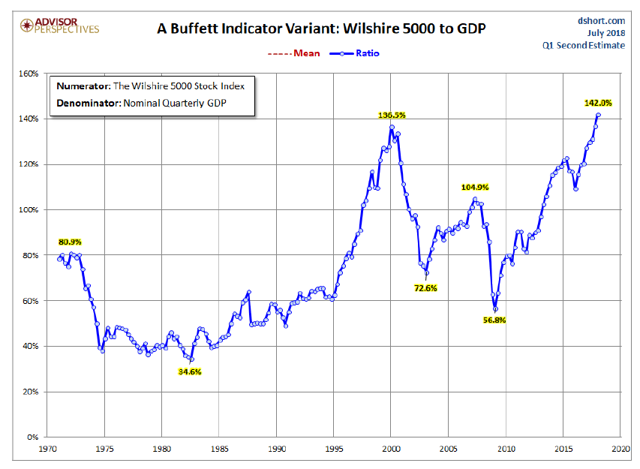 Both seem to paint a pretty similar picture about today’s valuations, but differ slightly when looking back to the tech bubble years of 1999-2000.

Along with a definition/some summary statistics:

Though not the highest it’s ever been, it’s definitely getting up there.

S&P 500 Earnings Yield: This is an inverse of the commonly used P/E ratio, meaning that the lower the yield, the higher the implied valuation (though watch out for years with drop-offs in earnings like in 2009).

Painting a little more color on today’s relatively low earnings yields, it is also important to consider that we are coming off of a quarter with record high profit margins. 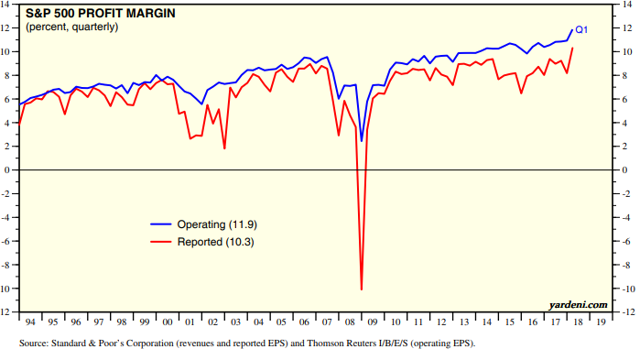 Overall, it’s clear that valuations are high across the board, though they can always persist or go higher. This isn’t about trying to call a top as valuations aren’t very predictive of short-term market movements, though this does provide some insight into prospective returns over longer time periods.

S&P 500 Float Adjustment: This is actually something I just found out about, after listening to an episode of Jesse Felder’s podcast with Steven Bregman, and I’m stunned that it isn’t more widely discussed.

In 2005, Standard & Poor’s (SPGI) changed the structure of the S&P 500 index. The index had historically been market-capitalization weighted (price multiplied by shares outstanding), but the company moved to a float-adjusted index structure. The float adjusted index structure basically excludes the percentage of a stocks insider ownership from its float, thus stocks with higher levels of insider ownership are weighted proportionately less in the index. This was a business decision to make more money for Standard & Poor’s, given that this is a low fee business that must be operated at scale.

Though the structure of the index was changed, common historical return quotations were not. This is why historical index return metrics are so misleading, and why the prospective return profile looks so much worse, even with a longer-term time horizon. Much of the historical returns to the S&P 500 index have come from owner-operator type companies, and these historical figures used to advertise passive index based strategies have not been adjusted downward.

Here are a few reasons why prospective performance looks dismal for the float adjusted index, and why this move came at the expense of investors:

The often quoted 10% annualized return number is before inflation. After adjusting for inflation the number is close to 7%. This number is also the battleground for some debate as there is a lot of skepticism over the accuracy of the CPI (which is used to gauge historical inflation).

Often referred to as the only free lunch in finance, diversification is not being well-served in many passive index investment vehicles. 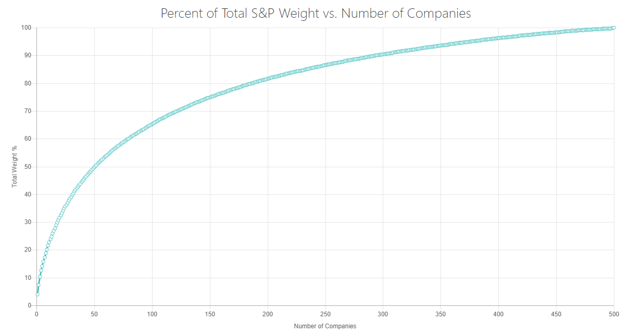 Though this isn’t actually too out of line with historical levels, it’s still something to take note of.

Beyond diversification between individual companies and sectors, it’s also important to consider diversification in money flows. Investors may gain a false sense of comfort by being diversified by metrics such as market capitalization, sector, and geography, when potentially, all of their money could be tied up in the same trade. Because stock prices in major indexes are being supported by the same source of supply and demand (flows into passive funds), inflows have propped up prices across the whole market. While beneficial on the upside, as always, this works both ways.

Opportunity for Informed Investors Seeking a Margin of Safety

The fact is that for the average person, individual security selection or manager selection is unrealistic. Passive buy and hold strategies are still probably decent advice for the average person with little to no market knowledge, though the fact remains that those with little to no market knowledge cannot expect high returns. For enterprising investors, much better opportunities abound.

Informed investors seeking a real margin of safety should look outside the realm of commonly covered stocks with high-levels of passive ownership and Wall Street coverage. (though this not to say that all stocks with significant levels of passive ownership should be avoided like wildfire, opportunities may still exist, they are just much less likely).

Here are a ways active investors can do just that: 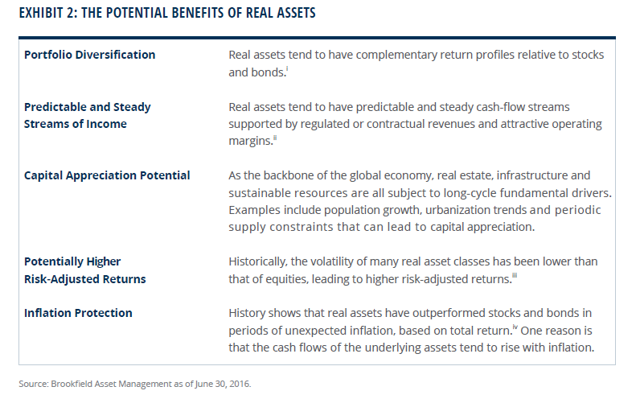 The original rationale for passive indexing makes a lot of sense, and it still may prove to be the best strategy for many market participants (if they are able to stick to it). That being said, the prospective returns for passive indexing strategies over the next 5-10 years look dismal when considering current valuations, changes in index structures, and current diversification levels. Enterprising investors in search of a margin of safety should do their work in more lucrative hunting grounds with higher levels of dispersion, such as stocks that are under-represented in passive investment vehicles, and certain real assets.

My journey down the never-ending value investing rabbit hole…Passionate about compounding knowledge and compounding returns.