Dead Companies Walking: How A Hedge Fund Manager Finds Opportunity in Unexpected Places by Scott Fearon with Jesse Powell, is an engaging and easy read detailing experienced asset manager Scott Fearon’s investments in failing businesses (both on the short and the long side). The book isn’t set up as a how-to guide, but there are quite a few valuable nuggets of wisdom littered throughout. I did my best to distill what stood out the most to me in my summary below, but I would highly recommend checking the book out yourself! 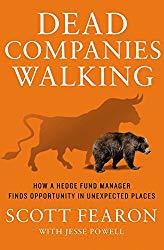 Hedge fund manager Scott Fearon starts the book by detailing his first encounter with a large market crash, the oil boom and bust in East Texas. He goes on to describe how this event, along with subsequent manias and crashes including the tech bubble in the late 90s and the housing bubble in the mid-2000s, shaped his views of markets and thinkings on failure. He describes failure as a “natural-even crucial element” of a healthy economy, and that people who are willing to accept this fact can “make a hell of a lot of money”. Through his long career in the asset management business, and experience interviewing managers to invest both on the long and short side, Fearon detailed the six most common business mistakes that lead to failure.

Importantly, Fearon notes that the vast majority of executives of failing companies are neither stupid nor fraudsters, and that most are in fact intelligent and hard-working. These six common mistakes are traps that anyone can fall into, and that’s why it’s so important to understand and recognize them.

“You can be richer, smarter, and more successful than anyone else. But if you’re not brutally honest with yourself about your own potential for failure, you’re going to have a problem—and you’re going to lose money, maybe a lot of money.”

Most people have a behavioral tendency to overweight the importance of recent history in their analyses (whether they be management teams or investors/analysts). Businesses move in both small and large cycles, and the latter are often ignored. Fearon’s mentor believed it was critical for investors to speak to and evaluate management teams, but to do so with a healthy dose of skepticism as they are often overly-optimistic, and prone to fall into these same behavioral traps. Falling prey to historical myopia is one of the greatest risks for value investors who focus on recent performance and financials (current multiples) to decide something is cheap, while simultaneously ignoring larger cycles, trends, and secular changes; investments of this type are often called value traps. This lead Fearon to the growth at a reasonable price ((GARP)) model, and to his focus on businesses with increasing cash flows and intrinsic values.

Chapter 2: The Fallacy of Formulas

“Oppenheimer & Co. put out in which it rated SPMD an “outperform” stock, boasting that the company “trades at 5x/6x our 2010/2011 EBITDA estimates.” There it is. The culprit, the root of Supermedia’s irrationally exuberant rally: the EBITDA formula.”

Markets are dynamic and ever-changing, and no one formula is going to lead investors to success. Fearon described how his personal favorite GARP formula led him to miss out on early investment opportunities in both Costco (COST) and Starbucks (SBUX), because he thought the multiples were too high. This is not to say that investment formulas and standards are not useful, they are most of the time, but all rules have exceptions. One such formula that Fearon singles out, is the valuation technique commonly used by analysts of slapping a comparable EBITDA multiple on the next years projected EBITDA. He also details a couple of his personal strategies for entering short positions and describes what investors should be wary of, stating that he will generally hold off until the stock has lost at least half of the value of its 52 week high (to avoid the wrath of momentum investors and the potential for a short-squeeze), and likes his positions to have, “enough downward velocity that there’s little chance it will stop before it hits bottom”.

Chapter 3: A Minor Oversight, Your Customers

Probably the most important take-away from this book is the too often overlooked reality that customers are the lifeblood of any business. Too often, analysts and management teams misread their customers and mix up what they would personally want, with what the what the customers want. It’s critical to understand what people in the real world want, and how they actually behave. Fearon details a personal experience with this and writes of his own failure to account for his customers when he started a Cajun restaurant in Marin County, California.

“Men, it has been well said, think in herds; they go mad in herds, while they recover their senses slowly, one by one.

— Charles MacKay, Extraordinary Popular Delusions and the Madness of Crowds”

Though we often think of the largest and most recent examples when we think of manias and bubbles, the truth is they are happening all the time, just on a smaller scale. Fearon argues that at their core, manias are about storytelling, and they happen when people convince themselves that something must be true no matter what. One common mistake that investors make is averaging down on positions that move against them. While it is true that sometimes this could just mean an undervalued stock is getting cheaper, it could also very well mean that your oginial analysis was wrong. The fact is that everyone is going to be wrong a lot, and it’s important to not keep chasing losing ideas and let them blow up your whole portfolio. As the saying goes,“Double-up, triple-up, belly-up.” Fearon believes that the best money managers are the best quitters. This advice rings true with what we’ve seen happen recently with famous money managers who became publicly attached to losing positions and poured massive amounts of money into them (ex. Ackman and Herbalife). Fearon also wrote about his time trading options in college, and detailed the four lessons he learned.

In Fearon’s mind, the top personality trait of a successful investor is intellectual curiosity. It’s important to be someone who can’t accept conventional wisdom, reads vociferously, craves new ideas, and isn’t afraid to try them out and fail.

Buggy Whip Syndrome: “they failed to recognize that their industry had fundamentally and permanently changed”

Failing businesses often hope small changes will guide them back towards prosperity, when in reality, a successful change would take nothing less than a complete overhaul of the dying core business. Fearon gives the perfect example of this scenario with the story of Blockbuster. Blockbuster had the opportunity to invest in its online business to compete with Netflix (NFLX), but that would have meant making the painful decision to close its stores and lay off thousands of people. Instead, the company went with easier, smaller changes to its stores, including selling more candy and other movie theatre snacks. We all know how that story ended. The same is often true of entire industries,

“The Bible says, “Pride goeth before destruction.” I think they should put that quote in business textbooks, because pride often goeth before bankruptcy, too.”

This chapter is on various red flags to look out, and is probably best summarized with a few concise pieces of advice:

“Whenever I see the “sluggish economy” chestnut in a disappointing earnings report, I make sure to check how the company’s competitors are faring.”

This next quote also rings especially true as of right now, (TSLA) anyone?

“investors and corporate executives alike love to blame that old bogeyman, short-sellers. It’s a convenient way to justify unwise investments and deflect attention from the real reason companies lose value: the poor decisions of the people running them”

“failure might be more common than people like to admit, but it is not inevitable—even when things look irreversibly dire.”

Despite his success on the short side, Fearon has made the majority of his money on the long side. He presents some compelling reasons why short-selling isn’t as attractive as it used to be, along with a few tips for investing on the long side, which he argues will always be the best way to earn outsized returns.

On the long side:

“Get up and go outside, Scott…you’ll learn more in five minutes of talking to someone at a company than you will in a week crunching its numbers.”

“Peter Lynch, probably the most successful money manager in history, said the best you can hope for is to be right six times out of ten when it comes to picking winning companies”

Chapter 8: Losing Money Without Even Trying, Welcome to Wall Street

“But for all of his talent, he also had a critical weakness: he thought he had friends on Wall Street.”

In this final chapter, Fearon tells a few stories about the many unethical actions he’s seen in his career in the investment management business. One story in particular stood out to me. It was about a time he called a broker to let him know of some serious downside risks that he had discovered in one of the stocks he (the broker) was promoting. Fearon was met with outright hostility by the broker, who warned him not to mess with his commissions, and then threatened to call his boss. Fearon describes that managers also tend to just be focused on what’s going to make them the most money, fees. This is why many are focused on growing AUM rather than on earning excess returns with the capital they already have under their disposal. This reminds me of the Charlie Munger quote, “Show me the incentive and I will show you the outcome.” As Fearon puts it, “Asset size is the enemy of returns.”

He next details why he thinks most people in the financial world are terrible investors.

“If we want to return to a growing and dynamic economy, we have to learn to embrace failure again.”

It’s important to recognize that failure is a normal and natural part of business and the financial system. The markets collective fear of failure has led to extreme policies like the tax payer bailout of the financial system in 2009, along with the simultaneous push to near 0% interest rates by the federal reserve.

My journey down the never-ending value investing rabbit hole…Passionate about compounding knowledge and compounding returns.